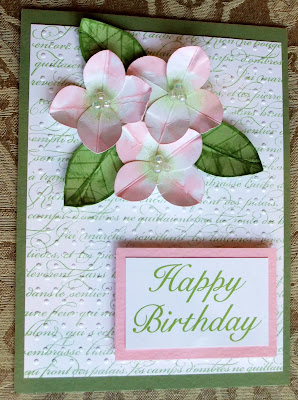 The hydrangea flower petals from my previous post have been incorporated into cards. As our international crafting group here in Surrey, England is trying to make lots of cards for an upcoming charity event, my hydrangea cards cover a number of holidays, including Mother's Day, Easter and birthday. 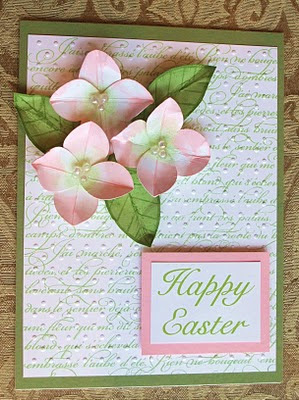 The background is made from the Stampin' Up stamp called En Francois, which is inked in Pear Pizzazz.

The script background was then run through the Cuttlebug using the Swiss Dot embossing folder. Very simple, but makes an impression! Oh, I made a pun!

As mentioned in the previous blog post, the hydrangea petals are made from the SU Full Heart punch.

I couldn't find the right stamp for Happy Birthday and Happy Easter; most of the stamps clashed with the fancy script background. As a result, I used my computer and Adobe InDesign to find a complimentary font and create a matching ink color.

However, I did manage to locate this lovely retired SU stamp for the Mother's Day sentiment (All Year Cheer). This was one of the first stamp sets I ever purchased when I joined Stampin' Up in 2003 in Houston, Texas. 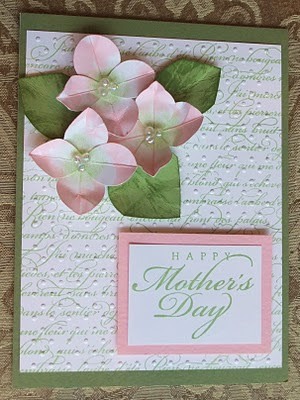 Here's a tidbit for you: In the United Kingdom, Mother's Day comes more than a month earlier than in the United States. You would not believe how much of a headache this can cause my frazzled brain. From what wikipedia says, Britain's Mothering Sunday is supposed to be the fourth Sunday of Lent. This year, that would be April 3, 2011. On the other hand, the US celebrates Mother's Day on the second Sunday of May, which will be May 8, 2011. The worst thing is when I forget the US date, and my poor mom in Texas is left without a card!
Posted by Kathy the Teawife at 12:59