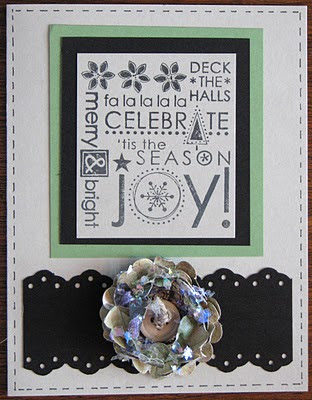 This Christmas card features a handmade paper flower covered in 'snow,' or chunky and flaky glitter.

The card base is Stampin' Up Sahara Sand cardstock, trimmed with Wild Wasabi and Black. A faux stitch was drawn on with a thin black marker.

The lacy trimmed black embellishment was made with an eyelet border punch.

The sentiment stamp is SU's Season of Joy.

The flower is made from paper that has been punched with the 1 3/4-inch Scallop Circle Extra Large Punch. Four layers of scalloped circles were used. They were sprayed with glimmer mists and worked into the shape of a flower by rolling and curling. Chunky snow glitter and buttons tied with twine were added.

I love the simple lines, but sophisticated feel of this card, which we will be making during an upcoming class in November.
Posted by Kathy the Teawife at 11:27

Good evening my dearest Kathy, how are you keeping? I hope you are well. You've been making some more gorgeous cards, projects, I am loving them all. Hope to catch up with you one of these days, hugs Linda x