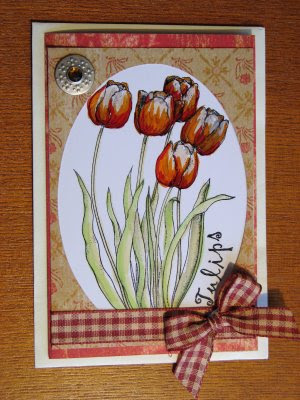 I finally got my hands on some Copic markers after a journey to a nearby craft store. These alcohol-based markers have been all the rage in the stamping world lately, and it seems everyone is using them or a similar brand. I wanted to see what the fuss was about.

I decided to use the markers to colour in this tulip stamped card, which was destined for the monthly card lottery of persnickety yahoogroup. I was working under the wire to get it finished before the end of Feb!

Incredibly, this was the first time I used this lovely Blockhead stamp, even though I've owned it for years! It really suits colouring.

The image was stamped with black StazOn onto white glossy cardstock. I soon discovered that alcohol-based markers move the StazOn ink, so I had some smearing. I suppose next time I'll have to try embossing, which is always a bit odd on glossy stock.

Although I don't have a lot of formal art training, I did study ceramic painting for four years with a Chinese art teacher while we were living in Malaysia. Some of the basic painting techniques have been invaluable in my paper crafting.

While using the Copic markers to colour this tulip image, I used techniques of shading and highlighting to create more depth with the image. 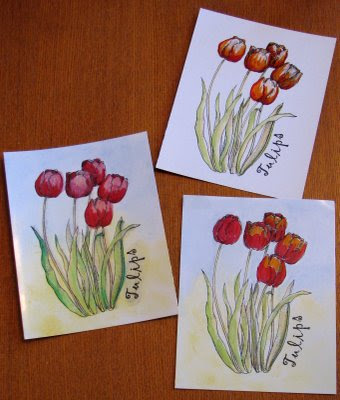 The image was first coloured with pastel shades, and then a harmonic medium shade, followed by a darker shade, where used. For example, on one tulip card, I used a light peach, followed by a medium orange, and finishing with a red marker.

For one card, I left the background plain and white. On the other card, I used both a medium-size make-up sponge and a small eye shadow applicator to add in background tones of yellow and sky blue pigment stamp ink. The small applicator allows you to get into those tiny areas. You should spread and blend the colour into the background by using circular motions with the sponge. Pigment ink works best for this process because it stays wetter longer and is easy to blend into the background.

To finish the card, I used some much cherished K&Co. Hannah cardstock and cut out an oval shape in one layer. I adhered the tulip image to the back of the cut out, and layered this onto the folded card, also K&Co. Hannah cardstock. As you can see, ribbon and other embellishments were added. 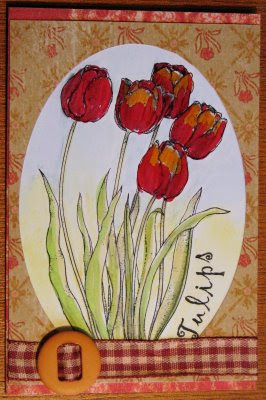 Having used these Copic markers for the first time, I'm already wanting more shades! If you are interested in Copic markers, you can visit their site for more information. 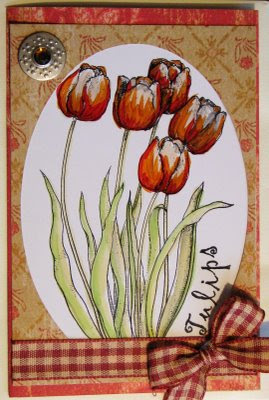 Posted by Kathy the Teawife at 14:50 4 comments: Links to this post