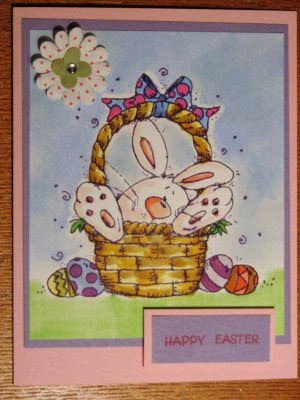 Whipper Snapper Designs has some truly adorable stamps, and I just couldn’t resist this one of the Easter Bunny flopped out in a basket! I decided to use this one as my primary Easter card that I was sending some of my stamping friends.

One of the reasons I purchased the Whipper Snapper stamps was to use the Copic Ciao markers. The WSD stamps are very open, leaving plenty of room for colouring.

I began by shading the edges of the bunny. I wanted him to stay a white bunny, but the shading gives him a dimension and depth. I experimented a little with the colours, using a flesh coloured beige on some of the rabbit images and using a fleshy pink on others. I think I like the fleshy pink the best. I used a light peachy marker to colour the ears, nose and pads of the paws. 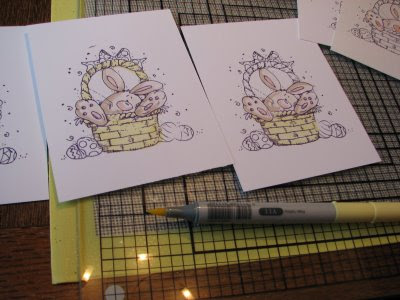 The Easter baskets were coloured in Pale Yellow Y11. Then, to make them appear as a wicker basket, YR23 (a orangey gold) and Y28 (a tan) markers were used selectively. Use short strokes to pull the two colours through the basket. 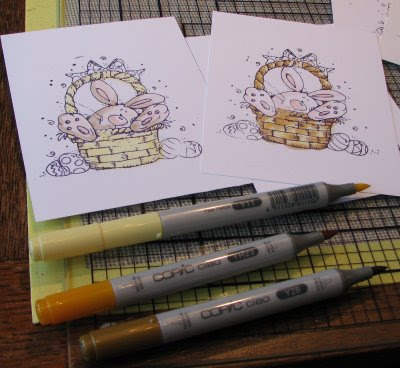 The bow and eggs were coloured in with a variety of spring colours.

At this point, you could leave the background of the image white. However, I decided to add background colours by masking, brayering and sponging on stamp ink. 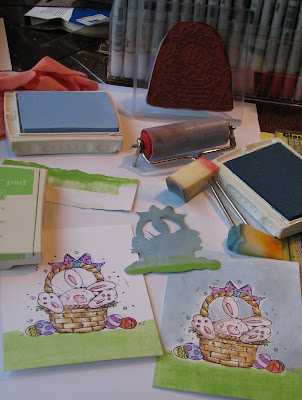 To mask the image, use as scrap piece of cardstock and stamp your image. Cut it out, including those pesky open spaces inside the stamped image. 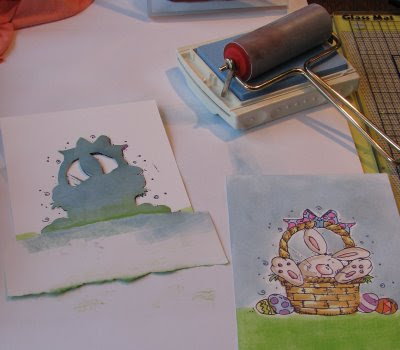 I used pigment inks for the background because they are more forgiving and can be ‘moved’ a bit after they are applied to the cardstock. A light blue was used on the sky and a bright but light green was applied to the grass. Torn paper was used as a mask to create a more natural skyline. 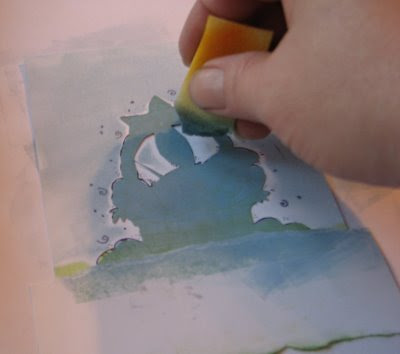 A make-up sponge was used to apply the blue in-between the basket handle and the bunny ears. The sponges were also used to add in a medium blue ink into the sky and a medium green into the grass to provide more dimension.

The finished image was adhered to a pink card and flowers were added to embellish the piece. I only own two “Happy Easter” stamps, which I stamped and added to the bottom right corner of the card. I think I like the Stampin’ Up script one better.

All in all, a very fun card to make! 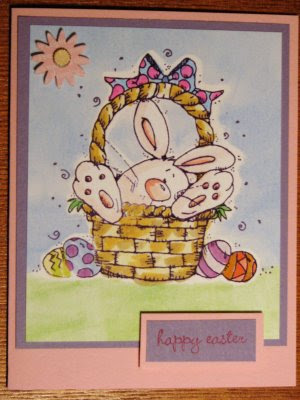 Posted by Kathy the Teawife at 19:33 7 comments: Links to this post 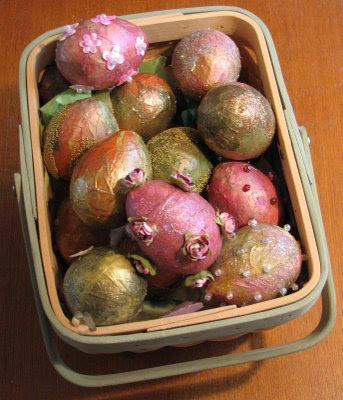 I have a penchant for altering anything that stands still long enough! I've had these papier mache eggs in my storage cabinet, and I decided to alter a few of them to send to some of my stamping friends for Easter. 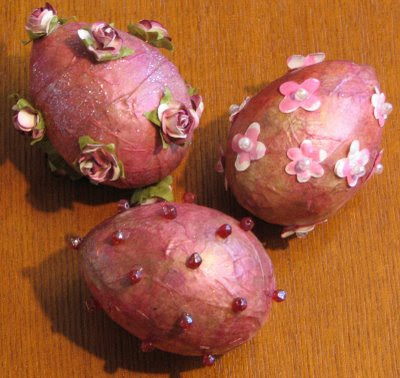 A couple of years ago, I altered some of these with less than stellar results. This time, I wanted to try something slightly different, and I was much happier with my results! 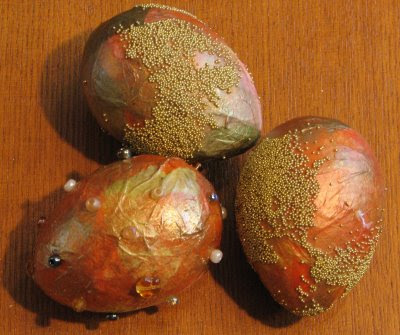 I began by tearing up tissue paper and gluing pieces onto the egg with my Royal Decoupage finish. Afterwards, I allowed the eggs to dry over night.

Once dried, I took a gold ink pad and sponge it all over all the eggs. Once again, I allowed the eggs to dry for a while. Finally, I added different embellishments to each egg, such as beads, glitter, microbeads, and flowers. 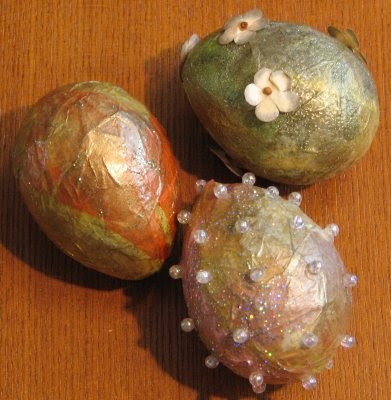 Posted by Kathy the Teawife at 14:55 6 comments: Links to this post 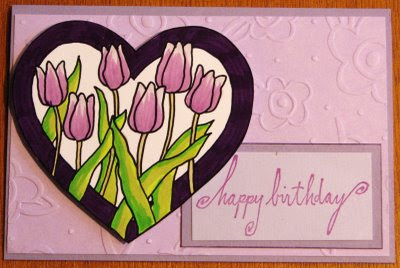 Thank you to all whom have left such lovely messages about my 'tulips in heart' cards.

First of all, some of you have asked for links about Copic markers. The best one, which was passed on to me by Ann Clack, is I Like Markers Blogspot by Marianne Walker. Make sure you go back into the archives to the very beginning to see some of the primary information on Copic markers if you are new to using them.

A number of you have asked to have a copy of the 'tulips in heart' artwork, which I have included here. However, I have a few requests before you download a copy as I've spent time and energy working with this image to perfect it for paper crafting.

1. You can download this art, but please be considerate and do not send copies of the artwork in emails or post the image on your blog. Instead, if your friends are interested in the artwork, please send them a link to my blog and this blog entry.

2. If you download this artwork, please leave me a message to say 'hi,' and let me know that you've stopped by.

To download: Click on the 'tulips in heart' artwork, which will open a new window. Once open, you can right click on the artwork to save it into your computer. You will find that it is a large image; this ensures better quality when you reduce it.

To print: Open the folder on your computer containing the artwork. Click once on the artwork to select it, and then click on the little printer icon, which should open a new window that lets you set up your printing parameters. More than likely, you will want to print four pieces of the artwork per page. Important: be sure to deselect 'fit picture to frame'; otherwise, the image edges will be clipped.

I love all the input and comments from all of you stampers and paper crafters. It's the inspiration that keeps me doing what I do!

If any of you live in England (or anywhere in the UK) and would like to join a friendly and vibrant stamping and paper crafting yahoogroup, please join me and my friends at Stampers of England. 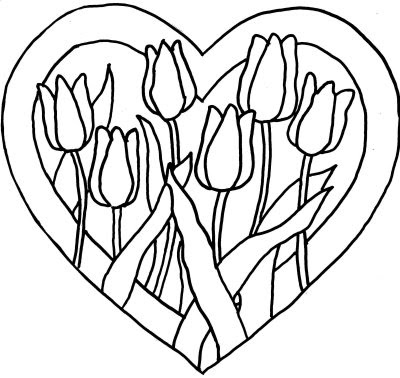 Posted by Kathy the Teawife at 09:57 7 comments: Links to this post

Tulips in a Heart Art 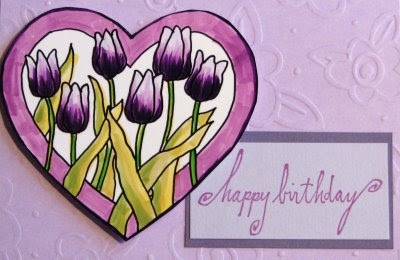 I've been playing A LOT with my new Copic Ciao markers.

I decided to use an old piece of artwork from back in the days when I painted clothes! LOL! If any of you reading this have been crafting a while, I bet you may have painted a shirt or two in your time!

This 'tulips in a heart' artwork came from my mom, who gave it to me way back in 1992! Since the artwork is a nice open piece of line art, it is perfect for shading and colouring.

The 'happy birthday' sentiment in the card above is an unmounted rubber stamp from Inkadinkado. 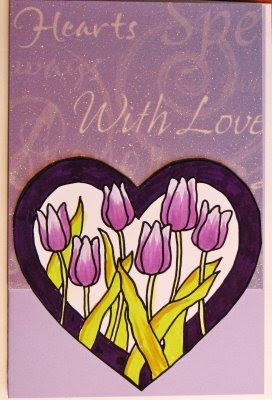 For some of the artwork, I took Stampin' Up Whisper White paper and ran it through the printer -- printing four images of the heart tulips per page.

I also used Stampin' Up glossy cardstock to print out the images. The colouring and results were very different, depending on which paper I used. The coated whisper white created much more vibrant colours, but they moved and blended less. The glossy stock enabled more shading and blending as the marker ink glides and moves across the paper. 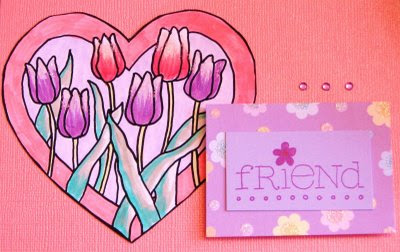 The 'friend' sentiment above is a rubber stamp from Stampin' Up!

To shade, I took the lightest colour and covered the tulip. Then I took a medium tone, and pulled the colour no more than two-thirds of the way up the tulip. And finally, I used a darker shade, which I only used lightly, pulling it no more than one third to one half up the tulip. The broad strokes on the tulip should be pulled from the base of the flower upwards. Pulling the marker up the flower gives a sense of flow and directionality to the petal. 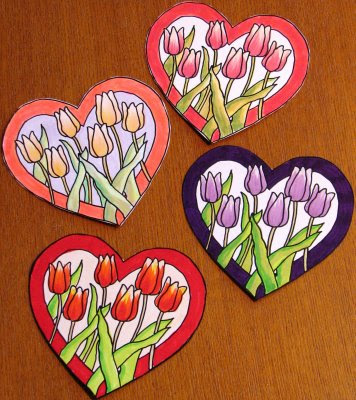 There are a variety of colour combinations since I wanted to try out different tones and shades. Also, there are some hearts still waiting to be made into cards.
Posted by Kathy the Teawife at 14:22 3 comments: Links to this post